When an Apple iMac G5 locks up on you, it might mean the hard drive is bad. 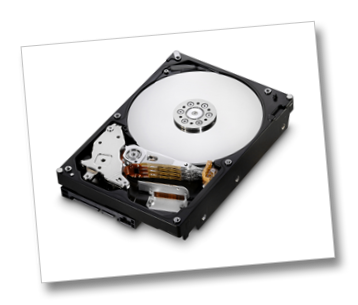 Many folks have contacted me over the years about their Apple iMac G5 problems they have been having because of bad motherboards or power supplies. Well, I thought I would share a story of my own, in regards to trouble shooting a bad iMac G5, in the hopes that it might help some of the folks out there in Apple iMac Computer land.

I recently picked up a used iMac that was giving the previous owner fits, in that it would eventually, after some time of being turned on, would lock up on them and only show the Apple logo at startup with the little circle going round and round. The fans would start turning at full speed. Once this occurred, the only way to get it back up and running was a fresh load of the software from the DVD disk back on to the hard drive.

I tried resetting the PRAM (Parameter RAM) and also tried resetting the SMC/PMU [System Management Controller (Intel Macs) or Power Management Unit (PowerPC Macs)]. I also tried replacing the PRAM backup battery (Energizer 2032) that retains the small amount of nonvolatile RAM (NVRAM) for the PRAM. This is where the date and computer settings are stored when the computer is turned off. None of this made any difference on my iMac lockup problem. Here is a very good article overview of the PRAM and SMC/PMU failure symptoms and when to reset the PRAM and SMC/PMU.

Well, after repeated hardware tests, with no indications that any hardware was bad (so much for hardware tests), I pulled out the old Maxtor 250 GB hard drive and tried reformatting it externally and backing up one of my other iMacs to this hard drive using a USB connection and an external hard drive adapter. The backup was completed successfully, and I returned the hard drive into the original iMac G5 cassis, and it booted up. Well, this was only a short term success. The iMac locked up when trying to do a software update. I was thinking that the software might be locking up because it was installed on the other iMac and registered on the other iMac. So, once again I took a brand new Leopard software disk family pack, and tried loading it on the hard drive again. No luck on this software load either. It bombed out part way through the loading process and returned to the Apple logo going round and round on startup.

Well, I am not one to let a little Apple logo roadblock stop me from getting to my iMac computer land destination. So out I go to my local Frys store (Frys is a large electronics store on the West Coast and another 8 states) to find out the best deal on a serial ATA hard drive. I didn’t want to spend a fortune, and I wanted to get the best value for the money. I ended up purchasing a Hitachi 640 GB HD for around 70 dollars. I figured I could always use this drive on something else if it didn’t work to fix the problem on this iMac.

So, I brought it home, opened it up, placed the mounting brackets on the new hard drive, mounted it in the iMac, and buttoned the whole computer back up. I then placed the Mac OS X Leopard DVD install disk in the slot, turned it on, held down the “C” key on startup. I then used the disk utility to format and mount the hard drive. Then loaded a fresh installation of OS X Leopard, did the updates, and have been running terrific for three weeks or so with no problems. I even added a “matched set” of PC 3200 1GB memory sticks for a total of 2GB of RAM. Now, I am a bit jealous for my own original iMac G5 computer with Mac OS X Panther installed. I think I will upgrade my other 20 inch iMac G5 to Leopard too. But that is a project for another day, and I am told that you have to do a fresh install too. Which means backing up and transferring the files over to the new installation.

Well, for the time being I am on happy trails to you, until we meet again.

Just last week, I had another iMac G5 computer with a Seagate Barracuda 7200.7 160 GB hard drive (Apple identification:  160GB C6SER 655-11109D “KA45304C7RT9A)   go out. I went to FRYs again and selected a 1TB Seagate drive (drive only, not boxed) and installed it. I had a problem that it would not show up with the Apple Disk Utility. However, when I used my adapter plug to plug it into a PC, the drive would display. I tried using the jumper to force it to a slower access speed, but it still would not show up in the iMac. I then took this one back and got another brand (Hitachi 500 GB hard drive only, not boxed) from Frys again, but this one was completely dead. It would not spin. It was an old drive that was the last one in stock. I took that one back also, and Frys confirmed that the drive was indeed dead.

However, I did find another Hitachi 660 GB SATA hard drive online at Frys that I did order. When that one came in, it plugged in just fine and showed up with Disk Utility, formatted, and loaded software with no problems.

I believe other manufactured brands internal drives will indeed work with the iMac G5s, I just have not been able to confirm which ones.