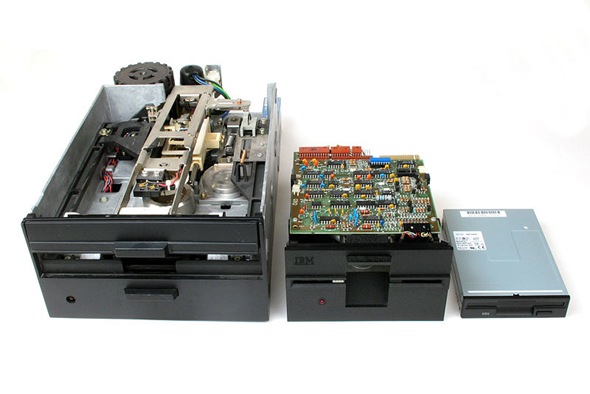 Readers have been asking for quite some time if I have found out any more information on the FDD SDD interfaces.

How is the FDD SDD interface shaping up?

I would like to see a device in a 3.5″ form factor to fit in existing housings.

It should have a SD slot in the front with a LED or LCD display, up/down buttons and a soft eject/reinsert button, this way you can dial up the appropriate floppy image and then soft-insert it.

Disk images can be stored in individual folders on the SD card and accessed incrementally.

Just a couple of thoughts. I think this device has potential to be a very popular eBay item.

In response to those emails, and thank you for sending all those emails to me by-the-way; below is FDD information that I think many engineers and end users will find very useful and some possible solutions to the old legacy floppy disk drives.

Some of the FDD emulator manufacturers are listed below.

Here are some up front notes about floppy disk drive emulators that I think are important to note. Not all emulators will emulate all the various types of floppy drives. There are many types of floppy drive formats and floppy drive types. The Lotharek HxC emulators, along with the software that is available, in my opinion allows for the most flexibility with a wide range of applications. In essence, the emulators can be used in Single Sided, Double Side, DSDD, 720KB, 1.4KB, 5¼-inch DD, 5¼-inch HD, 3½-inch DD, 3½-inch HD, Shugart modes, along with a number of others.

– USB version which allows you to connect the floppy disk drive interface of the computer to a PC via a USB cable. For more information on this interface, go to “USB HxC Floppy Drive Emulator” page.

If you want to build it yourself, here is the information to build your own USB HxC Floppy Emulator. 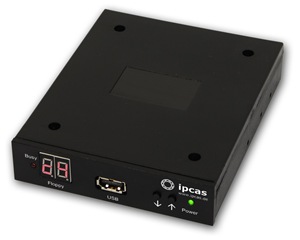 The USB Floppy Emulator 100 in 1 is from ipcas GmbH, a company located in Germany. The USB Floppy Emulator 100 in 1 device is a direct replacement for the old legacy floppy diskette drives. The connections on the back of this FDD emulator are identical to that of the old floppy disk drives. On the back of this device is the 34-pin socket where the floppy disk drive cable gets plugged in, and the +5 volt DC standard power connection for the floppy drive also plugs in to the back side.

Pictured below is the backside view of the ipcas USB Floppy Emulator 100 in 1 device. 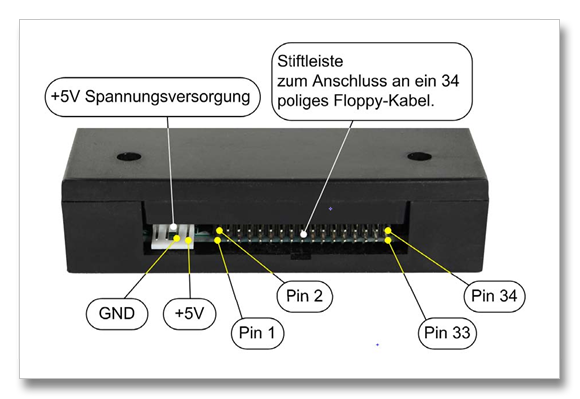 The beauty of this device is that no driver or configuration software is required to install and operate this floppy disk emulator with old legacy equipment. The manual states, “Many machines and devices are still using floppy disk drives as the only means of data input. CNC, milling, injection mold, or embroidery machines, laser cutting devices and integrated control systems, just to mention a few, are still being fed data with floppy disks several times a day.”

The Next Floppy Disk Emulator Device 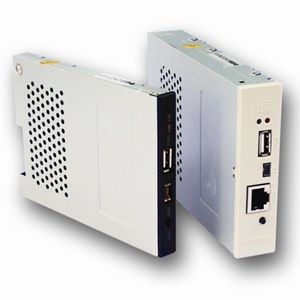 The backside of the emulator has the power connection plug and the floppy disk drive cable plug. Simply remove the old floppy drive cable and power connection, and plug it into the FDD emulator. The front side of the device has the USB Flash Drive Port, a File Chooser Connector Port, and even a Network port connection to another computer. The file chooser provides a means of selecting which files on the USB Flash Drive you wish to choose.

We request that you inform us on the original floppy drive type when placing an order to avoid mismatching the drive type. For example:

The picture below shows how the Floppy Drive Emulator from PLR Electronics would be installed. 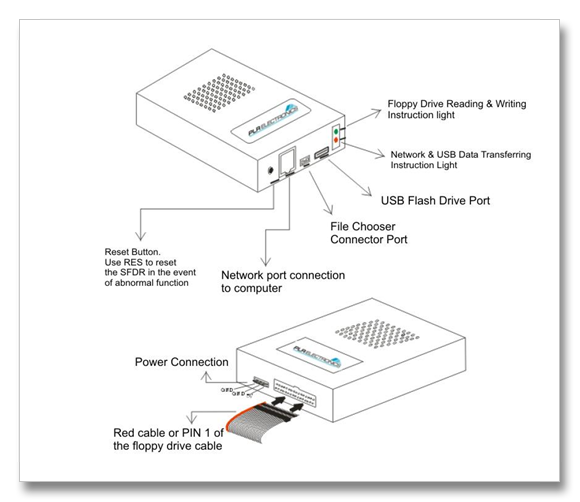 I would also imagine (though I have not confirmed) that if there were two floppy drives on the OEM equipment to begin with, you could hook up one of these devices and copy from one of the original floppy drives to the new emulated floppy drive onto a USB stick.

This is a plug and play device also. The 3½ floppy drive to USB flash drive reader manual provides some Frequently Asked Questions that are very informative.

Frequently Asked Questions
FAQs
– Q – Will this device work with a Windows NT operating system?
A – YES. This device should work with any OS assuming it is capable of working with IBM type floppies.
– Q – Will the 3 1/2 floppy to USB drive work in a XXXXXXXXX that can only read 720k 3 1/2 floppies?
A – Yes
– Q – We have XXXXXXX machines here and the floppy disk is 720K. IF we put a 1.44k in the machine the floppy drive does not work. Do you have a 720K mode on your device? T
A – Yes
– Q – Hi I am presently using a XXXXXXX keyboard which uses floppy disks on which I play my music files. Can this flash drive reader be used in my case?
A – Yes it will.
– Q – Hi, I currently have a floppy disk drive that is half the height of a standard drive. How can I modify this to work?
A – You do not need to modify anything. We offer a laptop height version. Please ask for this version when placing your order.
– Q – Is it USB 2.0?
A – No, its standard USB. However, USB 2.0 is used primarily for high speed data transfer. In this instance, the files you are using are very small so, there will be no noticeable difference.

C. On to the next storage systems emulators for replacing floppy disk drive units. 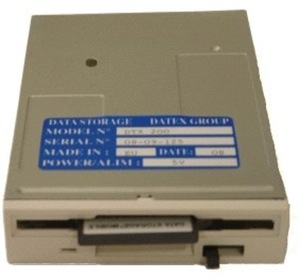 There are numerous options available for the Datastorage DTX200. Compact Flash cards or USB keys can be used to store data on. A floppy disk adapter card is designed specifically for the specific connection technology to directly replace each of the specific types and manufacturers model floppy disk drives.

The DTX 200 can replace all the floppy disk drives, for example:

The Datastorage DTX200 is designed to fit in the space of a 3.5 inch floppy drive. Apparently it is pre-programmed to have the same features as the floppy drive being replaced. It is designed to hold information on a CF (Compact Flash Memory Card), or a USB key and is designed to be used in numerous applications such as: cash registers, robots, planes, boats, and submarines. A StorageNewsletter.com press release, Datex Designed a Floppy Disk Drive Emulator, dated January 5th, 2009, stated that “this DTX200 emulator has already been installed in Japan and Taiwan, as well as in the French RATP.”

What do these Floppy Disk Drive Emulators Cost?

The cost of these Floppy Disk Drive Emulators vary considerably. At this time, I am not going to post the individual prices, because they are probably changing as I write this. The FDD Emulators go from approximately 275 USD to 1,100 USD and the cost could be more expensive depending on the added options. The links are there to the companies and the emulators in this article to compare the costs yourself.

Which one is best for your application?

There are pros and cons to each of the above floppy disk drive emulators. Some have more options than others. Certainly some of them are significantly more expensive than others, but that is not the only criteria that should be used in the evaluation process. Since I have not tried any of these emulators out myself, I feel I can not give you an honest analysis of which FDD emulator I would recommend.

If anyone does decide to use any of these floppy disk drive replacement emulators, I would sure like to get your feedback on how well they worked for you.

A reader was kind enough to post the following information in the comments section, but I wanted to post it here in case the URL hyperlinks change:

Here a complete list of the available floppy usb emulators:

Thank you for your comments.

Fell free to send me an email, and/or post additional comments online here too.

Take a trip with about Jim, with a Blast From the Past!