Pictured below are the capacitor locations and values for Apple iMac G5 iSight Mother Board 820-1766-A motherboards. 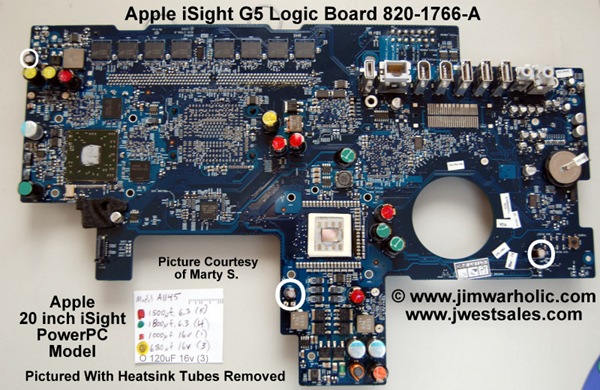 Note that there are at least two different iSight G5 models with different logic cards. Take a look at this one to confirm which model iSight you have.

Click the following link to purchase the iSight Mother Board Capacitors Kit.

Here is a down-loadable procedure for G5 iSight dis-assembly which can take you all the way down to and including the iSight motherboard removal.

Hi. I have purchased capacitor kit for iMac g5 iSight 20″. After disassembly of the logic board, I did find two of the capacitors apparently damaged and have replaced them successfully. After placing back everything in its place, the iMac doen’t boot and the led #4 (overheating) turn red, the fan starts and after a few seconds the computer shutdown itself. For accessing the two bad capacitors, I did remove the gpu heatsink (and put back again later). Does anybody experimented same problem after fixing capacitors? Do you think that replacing thermal paste for the gpu will work?

Thanks in advance.
Alberto

I’m not sure if you replaced all the capacitors on the board, or just the two bad caps. However, if the overheating LED comes on, I would check to make sure all the fans are operational. It is also possible that the PSU is bad too. I would verify the caps on the PSU before doing anything else. As far as the heatsink is concerned, if you removed it, then certainly you need new heatsink compound.

I believe that iMac is an earlier Intel based iMac. Some of those had problems with the graphics chip and/or the ball grid array (BGA) connections. Depending on the type of symptoms, i.e. lines down through the screen, it is probably a bad MOB logic board or video display unit if you do not see any bulging capacitors. These are very expensive to fix. Here is a link to a video that is showing an iSight G5 model that may be similar to yours. Though, I am not sure if that video is the G5 model or simply a iMac. Here is a link to the history of the iMac.

Hope that helps you out.

As I had one of these in my repair shop for ages, and after months of hunting and testing for the problem, I managed to narrow my issue right down to the Northbridge Chip on the front of the Logic Board, under the silver heatsink with the Infrared Sensor on it.

The iMac was sometimes booting, then shutting off or freezing completely. PRAM zaps would often help, but only for another 2 mins or so. Sometimes I could remote login via SSL when the screen had turned black, and this led me to think that it was a GPU problem, but testing other GPU’s didn’t help or change anything. Testing replacement PSU’s did not change anything.

In the end, I found that I could reflow (Hot air gun heat) the Intel Northbridge Chip, and the iMac would instantly work again fine for hours/days, then slowly exhibit the same problems.

In the end I realised that I needed to do a full Re-Ball of the BGA Northbridge Chip, and attempted it myself, but accidentally didn’t heat up the board enough to start with, and ripped off traces under the chip as I removed it, =p
*whoops*.

So I wasn’t able to finish repairing it and test it to confirm the problem, but if you still have your logic board, you could try taking it to a place that does BGA re-balling (not just Re-flowing which is only heating, in Re-Balling they actually remove the chip and replace each of the solder balls with new ones, preferably leaded-solder balls to protect against future cold solder joints and cracking).