For the longest time, it has been bugging me that my MacBook Pro was running above 80 degrees C and that the battery seemed to be draining awfully fast.

I figured out what was going on (run-a-way programs eating up the processor time), and will show you how to quickly identify and shut these problem programs down. Just so you can compare your system to mine, here are some of the specifications of my computer below. Keep in mind, I changed the name of my computer below to “my” computer.

My Apple MacBook Pro has been upgraded to 8GB of RAM and a 500 GB 5400 RPM Hitachi HD. The original had a 250 GB hard drive and 4GB of memory. Note, I intentionally stayed away from a 7200 RPM drive to extend battery life as much as possible, and I felt that running the hard drive at the lower 5400 RPM would be cooler for the system overall.

The MacBook Pro computer was running hot prior to the upgrades having been installed.

I had also installed the free smcFanControl addon program in an effort to reduce the temperature of the computer by increasing the speed at which the cooling fans turn. This did help a bit to cool it down, but I still felt that the computer was running way too hot and the battery was being drained extremely fast as well.

I keep the AirPort connection on and use it wirelessly on the various LANs in my daily travels. Bluetooth I keep turned off.

After much research online, where I read about other MacBook Pros running hot and then it started me thinking that maybe a program was running in the background that was essentially using lots of CPU processing power. I use Firefox, Safari, Google Chrome, and others for my various Internet Browsers. The reason I use so many different browsers, is that I need to do cross platform evaluations of websites, and verify that everything works and displays okay on each browser. That is when I found out that Mac OS X 10.6.8 has a utility application called Activity Monitor. You will find the Activity Monitor program by going to Applications — Utilities — Activity Monitor.app. 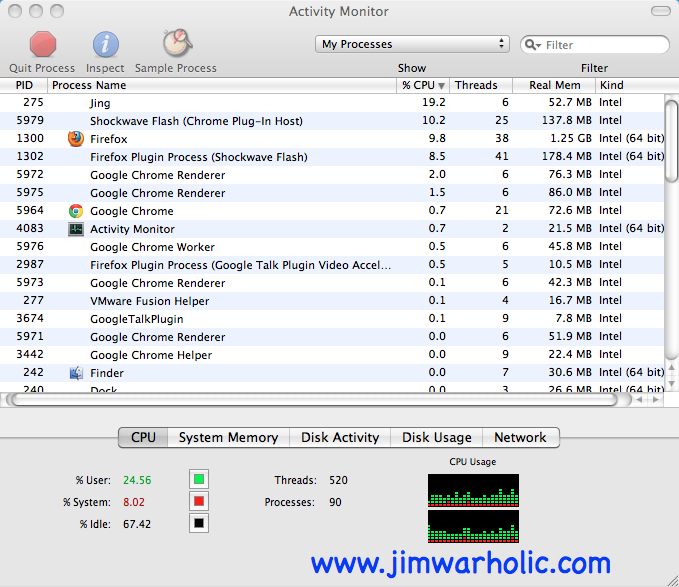 What I found was Google Chrome, (see second screen capture below of Activity Monitor which shows this happening) while not actually launched at the time, was still running Google Chrome Helper application in the background that was eating up 100% or more of my CPU time. I had to force quit Google Chrome Helper from the Activity Monitor application for it to actually quit. Then, as I watched my CPU temperature, I was able to note that it dropped almost 30 degrees C in five minutes.

Other things that really suck up a lot of processing power is Flash. Flash is no doubt one of those programs that requires a lot of processing to render the video images. I have noticed that using Flash in all the web browsers really makes a huge impact on the CPU and the battery life, not to mention that Flash will also cause the batteries to heat up due to significant current usage. Speaking of current usage, it would be nice to be able to quickly monitor the current draw in milliamps and voltage. I guess there is an app for that too. I’ll have to do more research in that area.

I have since placed the Activity Monitor program on the Dock (simply by dragging the program application onto the Dock), so I would have quick access to it. I still like and use Google Chrome, but I pay a bit more attention to what programs are now running in the background, and what might be sucking up CPU time and battery power. Here is an additional link with info of why your MacBook Pro might be running hot (opens in new window).

What I believe is happening, is that sometimes one of the applications (in this case Google Chrome Helper) gets caught in a loop, and simply runs away using lots of computer CPU processing time and causing the battery to quickly become depleted. This is not only related to Google Chrome, but I have also seen Firefox do the same thing, thinking that the program has been quitted, when in reality it is running in overdrive in the the background. Below is a screen capture with Google Chrome Helper running in overdrive when the actual Google Chrome program is not running.

So, if your MacBook Pro seems to be running too hot, take a look what background software applications might be running. Try quitting those programs, and then if that doesn’t work, try “force quitting” those selected applications with the Activity Monitor program, and see if your CPU temperature cools down. Then you will know for sure what is causing your computer to run hot.